Mikel and I were lucky enough to get to see this year's Mormon Tabernacle Choir Christmas concert.  There are few things that make Christmas feel as special.  This year's concert featured Brian Stokes Mitchell (Tony winner and Broadway star) and Edward K. Herrmann (actor a la Gilmore Girls).

The whole experience helps to ring in Christmas.  Getting to walk through the snow, window shopping through the Gateway and seeing the buzz of the city.  The lights at Temple Square are some of the best and most festive in the world and the conference center is always an amazing venue to be at--the beautiful concert hall, always a full house, being there with 21,000 people celebrating Christmas. 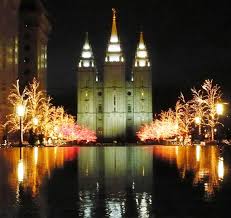 Mitchell was a fantastic performer--certainly a little quirky at times--but his singing was amazing.  The only song I knew him to have performed was "Through Heaven's Eyes" from the Prince of Egypt.

Though an amazing song my favorites that he performed were Bach's "Jesu, Joy of Man's Desiring" where he did a lot of very high range vocal instrumentals and then my very favorite, a song I had never heard before, "New Words".

The song is written by Maury Yeston, and after hearing his original version of it think Mitchell's arrangement to be much better.  The song is a lullaby from father to a young son as he learns his new words.  I would think the song would be beautiful in mosts opinion but being a new father myself certainly brought a lot of sentiment to the song.

I have searched all over the web for a clip of the song to no avail, but I have included the original lyrics below (which Mitchell changed for his arrangement but still close).

Look up there high above us
In a sky of blackest silk
See how round, like a cookie
See how white, as white as milk
Call it the "moon" my son
Say "moon"
Sounds like your spoon, my son
Can you say it?
New word today
Say "moon"

Near the moon brightly turning
See the shining sparks of light
Each one new, each one burning
Through the darkness of the night
We call them "stars" my son
Say "stars"
That one is "Mars," my son
Can you say it?
New word today
Say "stars"

As they blink all around us
Playing starry-eyed games
Who would think it astounds us
Simply naming their names?

Turn your eyes from the skies now
Turn around and look at me
There's a light in my eyes now
And a word for what you see
We call it "love" my son
Say "love"
So hard to say my son
It gets harder
New words today
We'll learn to say
Learn "moon,"
Learn "stars,"
Learn "love."

I only think on rare occasions:

my thoughts are limited to: