So I brushed the dust off of my external hard drive and pulled it back out to finish posting a few picks from the Peru trip. Consider the lost archives. 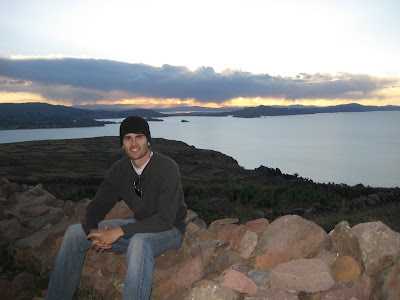 This pic is dusk on Lake Titicaca, the world's highest navigable lake located on the boarder of Peru and Bolivia. Though the landscape looks serene the journey getting there was not.

We decided to catch a midnight bus from Cusco to Puno (the major Peruvian city on Lake Titicaca). The bus was surprisingly, but deceptively nice. Before pulling out of the bus station, they took a mug shot of everyone on the bus, so if we tried robbing the bus or something, we were already on the police files.

My seat was next to a native. She fell asleep as soon as she hit her seat. We got off to a nice start and I dozed off. What had to be about an hour later, I awoke to the sound of metal clanking metal. The bus was stopped and the driver was gone, apparently outside the bus wacking at the engine. Looking around, I saw no lights, and at 1:30 am in the middle of nowhere Peru, there were no other cars to be seen on the highway. For almost an hour, with no word or explanation the driver clanked around outside with the engine. Finally, he got back on the bus, and with some struggle, but no further explanation, he started the bus up and we were once again off.

I dozed again only to be awaken the second time. This time I awoke with more of a startle--about 7 Peruvian SWAT team members were on our bus. They started at the front, saying nothing, reaching above our heads to open and inspect our bags. They moved slowly, front to back; when almost to the very back they apparently found what they were looking for. They grabbed at a bag of a Peruvian lady, who grabbed back and clutched the bag with everything she had. She refused to give the bag up and more and more of the SWAT members started grabbing at it and at her. She started screaming and crying but wouldn't let go of the bag. Finally, they overpowered her and without a word, marched to the front of the bus and left. They took the bag, but left the woman unquestioned on the bus.

We fired back up, and this time it is harder to fall back asleep. And just when I thought we had to be through the weeds, about an hour post-SWAT, we arrive in a small city located on the highway, to find that the highway is blocked by a bus and a semi-truck that tried to pass on the narrow building-lined road, only to find that they didn't both fit and had wedged themselves between the two buildings.

This "highway" was not wide enough for two large cars to pass at once, and there were only about two options for side roads. But they were both dirt, skinny, and windy. Many buses, blockaded and less determined, had already given up for the evening and were sitting in park waiting for the morning to come. Our bus driver, I think flustered by the course of the night's events, decided to brave one of the side roads.

These side roads would have been rough on a 4x4 pickup, and I confidently say, no bus had ever driven on these roads. I had 0% confidence that there was even an outlet for our bus along this road, but determined, our bus driver went for it. It wasn't more than 20 feet that a turn in the road required, literally, a 20 point turn. Another 20 feet, and the same thing again. This road winded through this little city, turns at every block that required people to get out and to guide the bus through several point turns. At one point a car was parked on the road that blocked us from getting by. Without the faintest possibility of being able to retrace our path in reverse, our only option was to bounce the car off the road--so that we did. Several people got the car bouncing and tossed it far enough out of the way for the bus to get by. At one point, the street narrowed so much that one set of wheels had to descend a staircase, while the other set descended the road.

Two hours of effort, and we finally did make it past the barricade. Those hours managed to get us an effective 100 yards closer to our destination. But... the story ends well enough, as we did make it in to Lake Titicaca, alive and well. 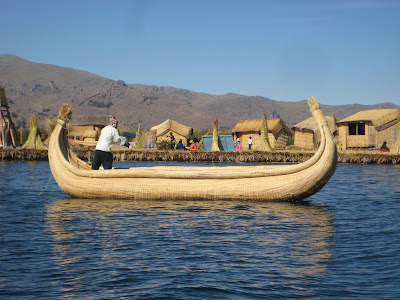 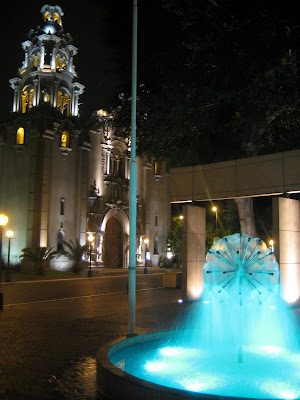 City center in Lima at night. 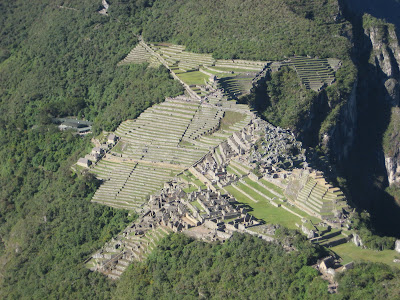 Machipichu as seen from the peak of Winachi Picchu. Amazing. 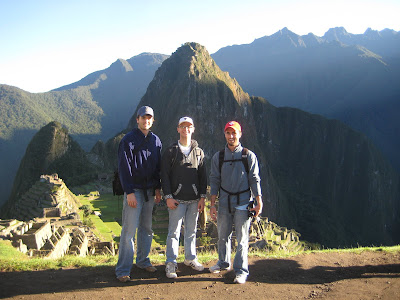 Myself, Justin, and Dan in front of Machipichu (the peak behind us is Winachi Picchu).
Posted by David Blake at 10:13 PM

I only think on rare occasions:

my thoughts are limited to: